What is 1MORE’s QuietMax Technology?

What is 1MORE’s QuietMax Technology?

1MORE’s QuietMax active noise cancellation technology is forever changing the way headphones deliver ANC by combining hybrid ANC technology, dual driver sound reproduction technology, precise audio tuning, dual band ANC and wind noise reduction in one suite, which is only available on 1MORE headphones. Together, these technologies immerse listeners into a captivating HIFI audio environment while also blocking out ambient noise. Traditional ANC technology has a fault.  ANC circuitry greatly diminishes sound quality, and its process obliterates the sound frequency in the upper range to the point no low pass filter can solve.  Until now, it was simply a matter of accepting and settling that when ANC was on, sound quality was compromised.  Now users don’t have to substitute good sound for great ANC because 1MORE engineers have not only innovated a way to make the ANC better, but they have solved the problems of diminished sound quality, wind noise interference, and uncomfortable ear pressure as well. 1MORE has revolutionized a new way forward in the market of active noise cancellation with their QuietMax technology.  In a multi-pronged attack, 1MORE engineers have used hardware developments, tuning acumen and proprietary 1MORE components and processes to not only make ANC better but to dispel the idea that ANC means reduced sound quality.  Quietmax technology is currently available on the 1MORE True Wireless ANC and Dual Driver ANC Pro headphones.

→ QuietMax is a Two-Way Audio System*: A two-way audio system is the same process as separating the treble and bass signals - just like in your car or home theatre.  By separating the treble and bass, 1MORE engineers have innovated a way to eliminate the chaos ANC circuitry causes by isolating the problem to one driver. 1MORE’s in-house Grammy-award winning sound engineer, Luca Bignardi, skillfully fills in the missing sound frequencies using the second driver, using his hand tuning process.  The result is punchy bass and crisp highs that you would expect from a high-end headphone, and the best HIFI ANC sound experience you can buy.

→ QuietMax is a Hyrbid ANC System: 1MORE’s QuietMax technology utilizes two microphones in its ANC process.  In light speed, the Feedforward mic (FF Mic) detects outside noise and tells the internal sound system to produce an anti-phase, i.e. noise cancellation signal at an accuracy rate of 99% or higher, so fast it's imperceptible. A second Feedback Microphone (FB Mic) addresses in-ear noise caused by the Helmholtz effect, most people know this from holding a seashell up to your ears or cupping your ears; the sound waves become excited and cause distortion. The FB Mic employed in 1MORE’s QuietMax technology, sits behind the driver and effectively detects and dampens this sound interference much like the suspension in your car dampens bumps in the road and eliminates distortion that occurs on the scale of micro-millimeters between the driver and your ear drum resulting in a more complete ANC process. → QuietMax is a SAFE Wind Noise Suppression System*: Another factor when using ANC headphones is the annoying noise wind makes when buffeting your microphone when ANC is turned on.  Realizing that most people are engaged in outdoor activities when this occurs, 1MORE engineers designed a process for Wind Noise Reduction (WNR) that ensures safety as well.  When activated the FF mic reduces its sensitivity, thus reducing wind  noise interference, while simultaneously allowing for other external noise to be heard. In this way, the WNR mode in the QuietMax suite allows for wind noise abatement and also maintains the ability to hear cars or other ambient noise that allows for SAFE outdoor activities. → QuietMax is a Dual Band ANC System: 1MORE’s QuietMax technology adds another innovation to address the issue of disorientating ear pressure inflicted on users when ANC is activated. Most ANC systems cause increased pressure in the ears, resulting in an uncomfortable, painful reaction from the ear drum, like going deep underwater. This is due to the fact that most ANC systems try to block out both wide band and frequency intensive sounds all in one cancellation signal.  1MORE’s QuietMax technology solves this by offering two ANC modes.  One mode addresses wide band noises like the sound you experience in a cafe which includes people speaking, computer keys typing at the office, distant birds chirping and the sound of a distant highway - sounds that traverse across a broad spectrum of the sound frequency. The other mode addresses frequency intensive sounds like airplane jet engine noise that have a high intensity but in a short range of the sound frequency. With QuietMax technology, users will always find the right level of ANC and won’t experience that annoying and painful ear pressure of the other brands.

What Problems Does QuietMax Solve?

How is QuietMax Different From Other ANC Systems? 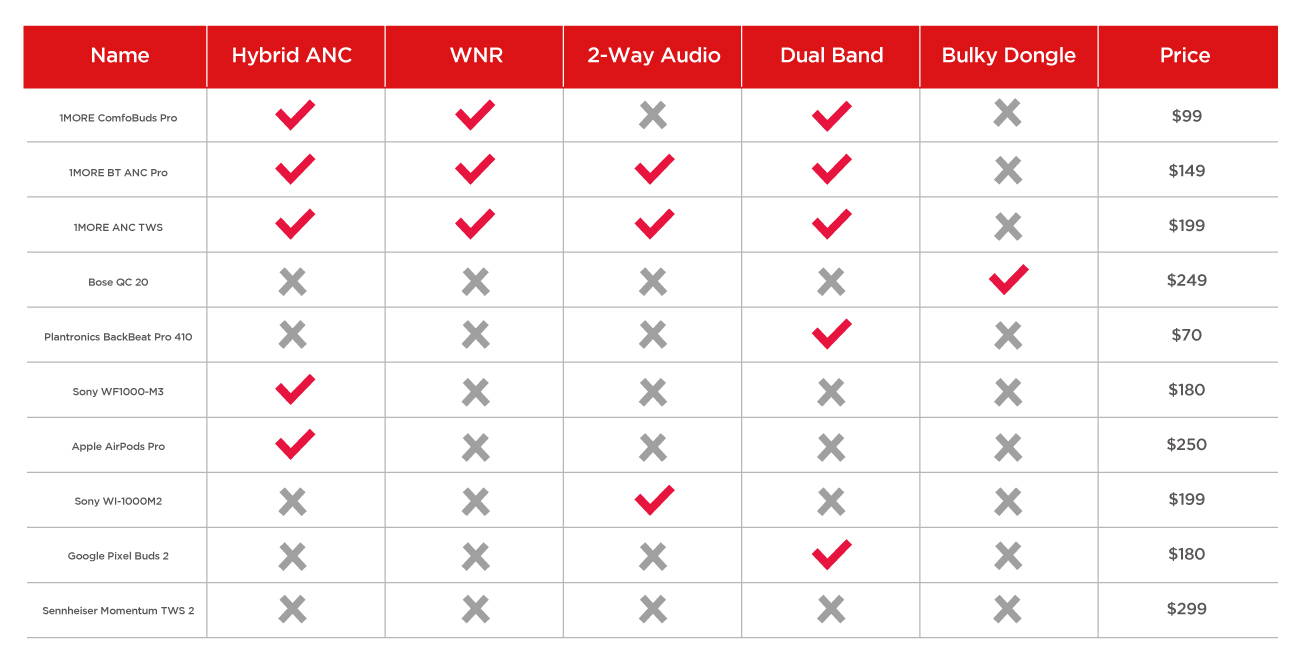